The miracle of Eisenhower Matrix

You are welcome to join our community of imagination, conscience, independent will, and, particularly, self-awareness.

📌The Eisenhower matrix is a feature of our task planner app that helps you not to drown in prioritizing your own tasks.

🎨You are the creator. You are in charge. You can not become principle-centered without first being aware of and developing your own proactive nature.

What is an Eisenhower Matrix? 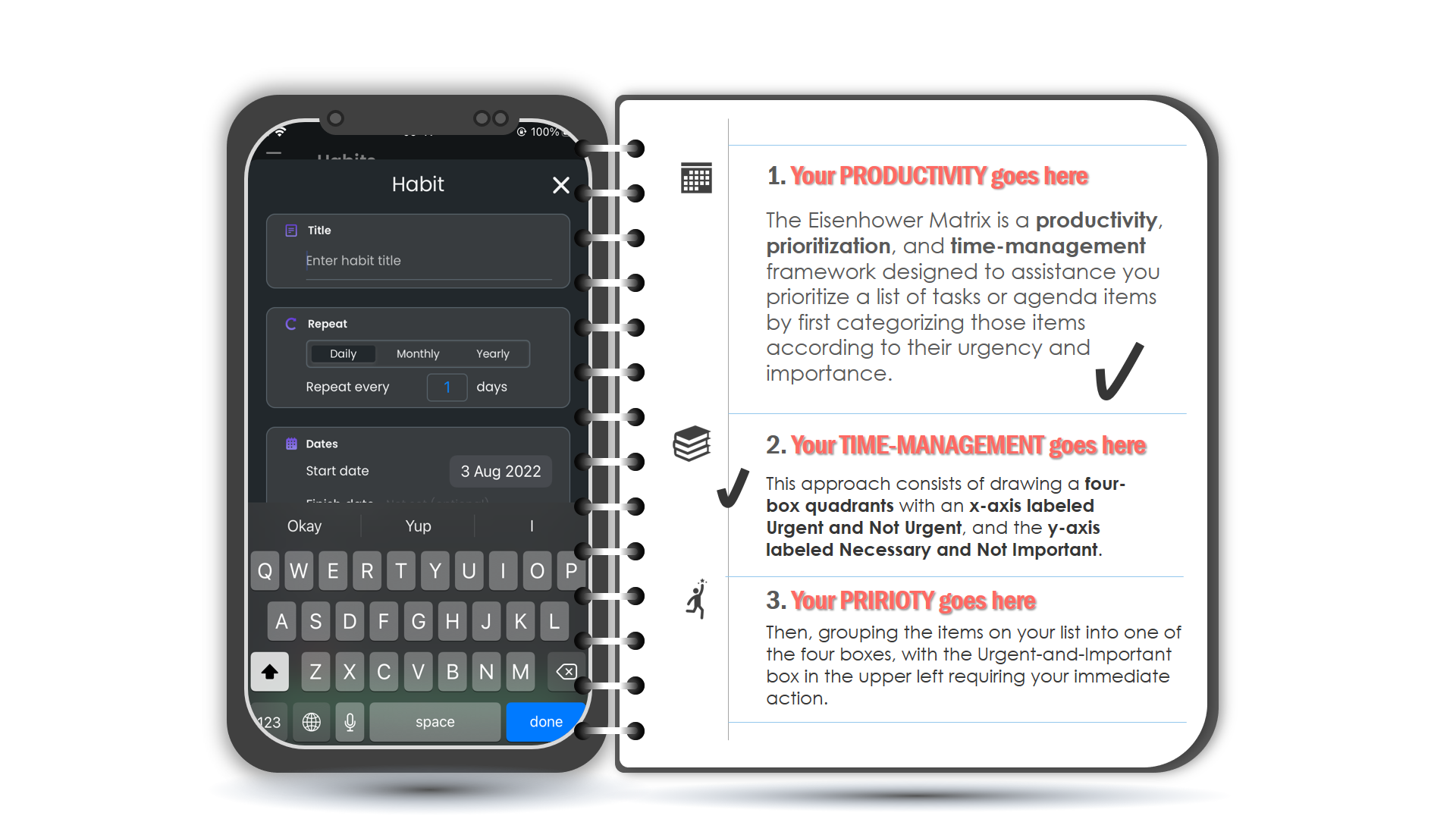 __The Eisenhower Matrix is a productivity and time-management framework designed to assistance you prioritize a list of tasks or agenda items by first categorizing those items according to their urgency and importance.
__This approach consists of drawing a four-box quadrants with an x-axis labeled Urgent and Not Urgent, and the y-axis labeled Necessary and Not Important.
__Then, grouping the items on your list into one of the four boxes, with the Urgent-and-Important box in the upper left requiring your immediate action. 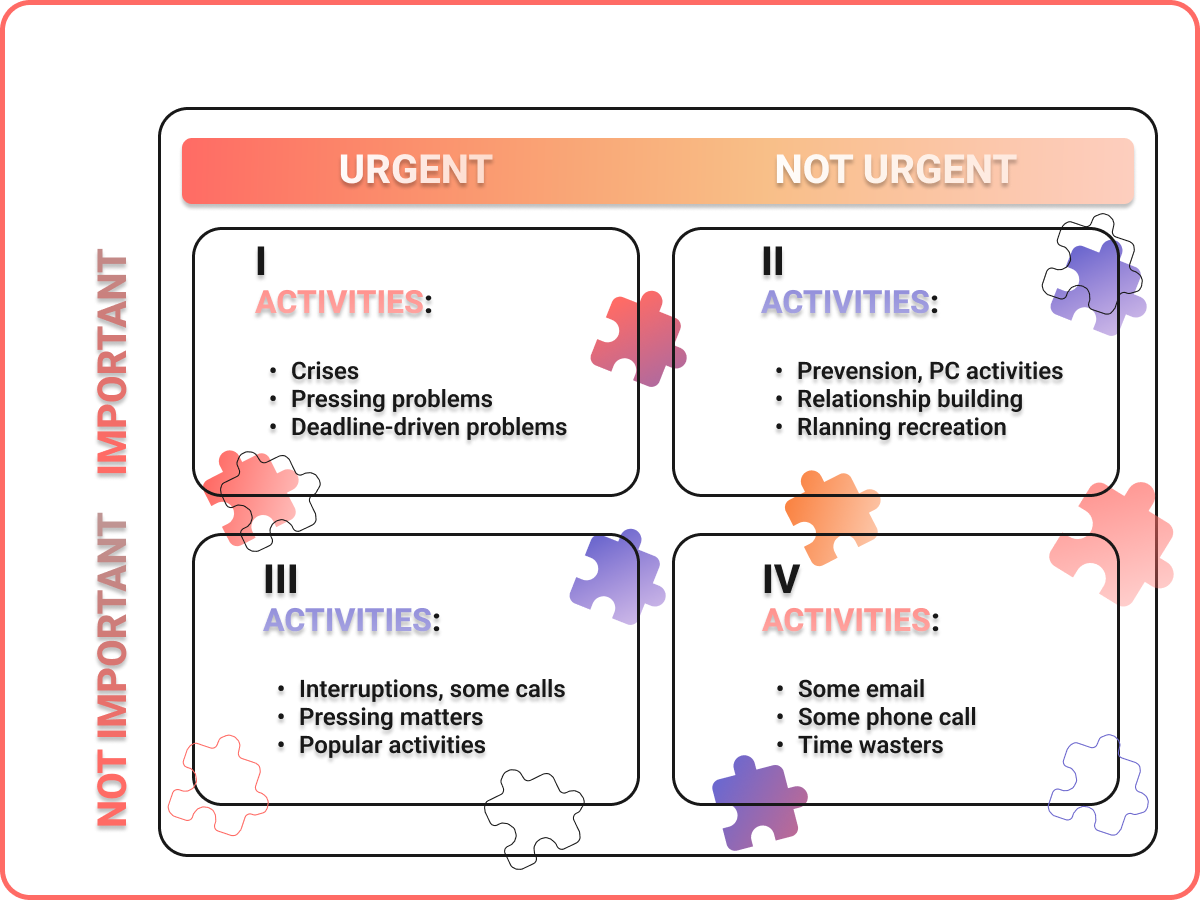 How it actually works

This simple exercise teaches you to quickly identify the importance and urgency of tasks on your plate and to separate them accordingly. It’s often easy to unintentionally procrastinate by doing tasks ourselves which could have been delegated or eliminated altogether.

We all have our own method of task management, whether you use a notebook or one of the many to-do list managers out there. None of them really incorporate the Eisenhower method because tasks grouped into 4 separate boxes isn’t an efficient (or pretty) way to work with the items on your plate. However, it’s not the act of placing tasks into separate boxes that is necessary, but the skill of recognizing when you’re in a situation that requires you to prioritize the tasks which demand your attention to avoid procrastinating on them.

Our team has found the method to be most helpful when dealing with an overabundance of work. When the amount of tasks is overwhelming, taking a few minutes to arrange and prioritize your tasks according to the logic of the Eisenhower method can be quite helpful.

You could use a Rizen App to truly have a virtual Eisenhower Box. What a golden bargain!

For example, it’s often helpful to look at all the work you do and then ask yourself which tasks have a direct effect on the amount of money you bring in?

For those tasks I do not need to do, I will move them to a “Trashed” folder in my to-do list app, whereas if it’s something an assistant can do, I’ll move it to a “Delegated” folder and let them take it over. Using methods like the Eisenhower Box or even your own prioritization system is by no means perfect.

Maybe we ignore the important tasks and focus only on the urgent ones because we truly believe in the moment that it’s the most important thing to be working on, only later having a feeling of regret that we didn’t find any time to work on that big project today.

For example, if I have a deadline coming up in a week for an article I need to write, it’s easy to get overwhelmed thinking about all the research and writing I will need to do.
📚The best way to make progress while still giving myself the time to handle the urgent tasks is to schedule it in for a small period of time in the days leading up to the deadline.
📃As with anything we find resistance towards, It’s easier to overcome the inertia of getting started if it’s reduced to smaller chunks of time.

✨If you often feel a lack of accomplishment at the end of your work days, then you might benefit from a little-known method to add to your mental toolbox.

⏳Eisenhower was perhaps one of the most larger than life figures to hold the office of President of the United States. Prior to becoming the 34th President, he attained the coveted rank of five-star general in the US Army, where he played a major role in planning and executing invasions against the Nazi’s in Africa, France, and Germany itself. While President, he managed to launch the Interstate Highway System as well as launching NASA, DARPA and more.

📈Throughout his life, he managed to remain incredibly productive, working his way up the ranks to eventually become the President.

🍀His productivity has been extensively researched, and by far one of the most useful strategies he’s credited for devising is now known as the Eisenhower Box.

It’s a simple method to help you avoid procrastination and prioritize what you should be working on.

📕Creating the feature of the habit tracker Rizen App has been inspired by the Steven Covey’s book <<The 7 Habits of Highly Effective People>> author of which popularized Eisenhower framework.

How to use the feature and customize your habits and goals 2️⃣ Click on the button "+" (any quadrant's button is clickable) to add a habit with individual parameters. 3️⃣ You can enter the habit tittle and description of it customizing them with emojis. 4️⃣ You have an opportunity to set a goal, which is connected to the quadrant's habit, and, of course, an activity which were created. 5️⃣ The next step is setting the date of a selection circle. 6️⃣ Put the "Create" and enjoy your Eisenhower Decision Box with Rizen App.

A PRODUCTIVITY WITH RIZEN

The 7 Basics of Productivity and Effectiveness by Covey The guide for juniors, middle and seniors of Productivity-dev

‼Our team has prepared for you a whole course of articles that will help you to understand the psychology and philosophy of the art of productivity.

💪Keep improving yourself staying with Rizen. Do not be a Randomizer!

Here are the keyes of the door to a world of confidence:

Personal Management The Deep Sence of Quadrants
Powered by WordPress © 2022

You can find out more about which cookies we are using or switch them off in settings.

This website uses cookies so that we can provide you with the best user experience possible. Cookie information is stored in your browser and performs functions such as recognising you when you return to our website and helping our team to understand which sections of the website you find most interesting and useful.

Strictly Necessary Cookie should be enabled at all times so that we can save your preferences for cookie settings.

If you disable this cookie, we will not be able to save your preferences. This means that every time you visit this website you will need to enable or disable cookies again.